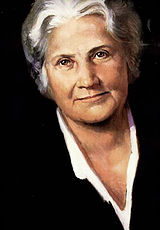 Maria Montessori (1870-1952) was the first female physician in Italy, graduating in 1897. She completed her training by studying philosophy and psychology, and became a professor of anthropology at the Royal University of Rome in 1904.
Starting her career, she took care of mentally handicapped children. Her observations led her to study the works of Jean Itard and Edouard Seguin, two famous French physicians. She quickly realized the importance of movement and sensory stimulation to the development of children’s intelligence.

She identified different stages of child development, and in particular the importance of “sensitive periods”.

She began to develop educational materials for the children she taught and obtained remarkable results with these children whom everyone considered to be hopeless. They scored higher than “normal” children from the traditional educational system. This made her think that her method could deliver even better results with ordinary children.

She continued her scientific work and she discovered some very important phenomena in the child’s development: 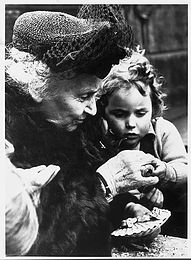 This was the beginning of global recognition of her work, the development of scientific materials, and the formalisation of training methods for Montessori educators around the world, in addition to the writing of her books and lecturing.

She was decorated with the Legion d’Honneur in France and was applauded in UNESCO on several occasions.

During her life she lived and worked in many countries: India, United States, Spain and Holland.

She founded the Association Montessori International in Amsterdam in 1929.
Maria Montessori wrote many books, and was nominated three times for the Nobel Prize for Peace.